WASHINGTON (CFP) — Seven Southern Democratic U.S. House freshmen who ousted GOP incumbents in November supported Nancy Pelosi’s bid to reclaim the gavel as speaker of the U.S. House — handing Republicans an issue to use against them in 2020. 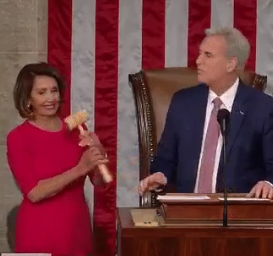 Colin Allred and Lizzie Pannill Fletcher of Texas, Kendra Horn of Oklahoma, Lucy McBath of Georgia, Elaine Luria and Jennifer Wexton of Virginia, and Debbie Mucarsel-Powell of Florida all supported Pelosi in the January 3 vote.

Two other freshmen Democrats who had vowed during their campaign that they would not support Pelosi — Joe Cunningham of South Carolina and Abigail Spanberger of Virginia — kept that promise, voting instead for Cheri Bustos of Illinois.

And despite signing a letter in November calling for new leadership in the House, Filemon Vela of Texas switched course to vote for Pelosi.

In the vote for speaker, just three Southern Democratic members did not support Pelosi — Cunningham and Spanberger, who voted for Bustos, and Jim Cooper of Tennessee, who voted present.

Cooper, who has been in Congress since 1983, had been a long-time opponent of Pelosi’s speakership, having voted against her five times previously.

After the November election, a group of 16 Democratic members, including Cooper, Cunningham and Vela, signed a letter calling for “new leadership” in the Democratic caucus.

Vela changed course after Pelosi agreed to support term limits for the House Democratic leadership, which will limit her speakership to no more than four years.

Pelosi needed a majority of the 430 votes cast for speaker. In the end, she got 220 votes, four more than necessary.

Hillary Clinton carried Murcasel-Powell’s district in South Florida by 16 points and Wexton’s district in the Virginia suburbs of Washington, D.C. by 10 points.

Among Southern Republicans, only three did not support their candidate for speaker, House Minority Leader Kevin McCarthy of California.

Thomas Massie of Kentucky and Jody Hice of Georgia supported Jim Jordan of Ohio, one of the founders of the House Freedom Caucus, a grouping of the most conservative Republican members.

Walter Jones of North Carolina did not vote. He has been absent from Congress since September because of an undisclosed illness.

Of the 29 new Southern members of the House, 17 are Republicans and 12 are Democrats. Republicans hold 101 Southern seats, compared to 50 for Democrats, with North Carolina’s 9th District vacant.

The 9th District seat is likely to remain vacant until after the state elections board completes its investigation into the allegations of absentee ballot irregularities, which has been delayed until February because of a new law revamping the board.

Harris has filed a lawsuit seeking for force certification of the election.

WASHINGTON (CFP) — When it comes to Southern clout in the U.S. House, what a difference an election makes.

In the recently departed Congress, with Republicans in control, 13 of the 22 committee chairs hailed from the 14 Southern states; in the newly installed Congress, with Democrats in charge, that number will fall to just five.

Five Southern Republican chairs retired, and one, Pete Sessions of Texas, went down to defeat in November. Those who stayed find themselves in the minority for the first time in eight years.

The switch in control has shifted power from the GOP, in which Southerners made up nearly half of the caucus, to the Democrats, where Southerners only make up a fifth. And that has led to reduced numbers of Southerners among committee chairs.

Also, the outgoing majority whip, Republican Steve Scalise of Louisiana, will be replaced by the incoming majority whip, Democrat Jim Clyburn of South Carolina. Both men remain the only Southern members in their party’s top leadership.

But eight other committees that had GOP chairmen will now be headed by lawmakers from outside the region. And that list contains a number of the most powerful and high-profile chairmanships in Washington, including Judiciary, Rules, Ways and Means, and Oversight and Reform.

Unlike Republicans, who select committee chairs by voting within the caucus, Democrats use seniority. All five of the Southern Democrats ascending to chairmanships had been the ranking Democratic member when Democrats were in the minority.

Scott, Thompson and Johnson, all members of the Congressional Black Caucus, are among eight new chairs who are African American or Latino. In the departing Republican Congress, all of the chairs were white, and 20 were men.

Among the notable newcomers to that group are Kay Granger of Texas, who will be ranking member on Appropriations, and Doug Collins of Georgia, on Judiciary–the committee that would handle any impeachment proceedings against President Donald Trump.

Michael McCaul of Texas, who had been chairman of Homeland Security, has shifted to become the new ranking member of Foreign Affairs.

Six Southern Republicans who had been chairs of their committees will continue as ranking members in the new Congress–Mike Conaway of Texas, Agriculture; Mac Thornberry of Texas, Armed Services; Steve Womack of Arkansas, Budget; Virginia Foxx of North Carolina, Education and Labor; Phil Roe of Tennessee, Veterans’ Affairs; and Kevin Brady of Texas, Ways and Means.