The Daily Beast posted a short clip from video taken during a debate in York shortly before the 2016 election. 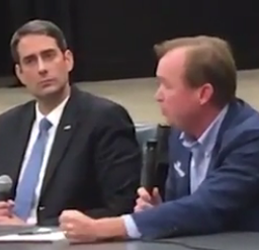 “Yes, I am supporting Donald Trump. I’m doing so as enthusiastically as I can despite the fact that I think he’s a terrible human being. But the choice on the other side is just as bad,” Mulvaney said.

Mulvaney’s comments were reported at the time of the debate by The State newspaper in Columbia. In that story, Mulvaney also called Trump and his Democratic rival, Hillary Clinton, “perhaps two of the most flawed human beings running for president in the history of the country.”

The Daily Beast did not say where it obtained the video clip, which did not contain the rest of the debate.

Mulvaney’s comments in 2016 stand in contrast to his December 14  tweet after Trump installed him as chief of staff, albeit in an acting capacity.

“This is a tremendous honor,” he said. “I look forward to working with the President and the entire team. It’s going to be a great 2019!”

Neither the White House nor Trump have responded to the video. But a spokeswoman for Mulvaney called it “old news” and noted that Mulvaney had not yet met the president when he made those remarks.

Mulvaney, 51, represented South Carolina’s 5th District from 2011 until he was named by Trump as director of the Office of Management and Budget in 2017. The White House has said he will not give up the OMB job while serving temporarily as chief of staff.

Neither Trump nor the White House indicated how long Mulvaney might serve in the interim role.

Mulvaney will replace John Kelly, who Trump announced would be leaving the White House by the end of the year.