WASHINGTON (CFP) — In the first major test of how Southern Democrats in vulnerable seats will navigate through ongoing House investigations of President Donald Trump, all of them stuck to the party line in supporting new powers that could escalate those inquiries.

By a vote of 229-191 on June 11, the House authorized the Judiciary Committee to go into federal court and demand that the Justice Department comply with requests for documents and witness testimony. 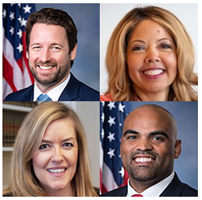 All 10 Southern House Democrats who flipped seats in 2018 and are at the top of the GOP hit list in 2020 agreed to give the committee the power to sue to force compliance, although none of them yet support moving toward impeaching the president.

Not a single Southern Republican supported the resolution, including 11 GOP members who are on the Democrats’ target list for 2020.

The resolution ratchets up the pressure on the Trump administration, as an increasing number of House Democrats are calling for an impeachment inquiry.

While none of the Southern Democrats in competitive seats have so far come out in favor of an impeachment inquiry, 14 members in safe seats have done so.