MIAMI (CFP) — U.S. Senator Marco Rubio has of Florida ended his presidential campaign after losing the Sunshine State to Donald Trump in the Republican primary.

The only Southerner now left in the race, U.S. Senator Ted Cruz of Texas, failed to win any of the five March 15 contests. However, his losses to Trump were narrow in North Carolina and Illinois, and Missouri was a virtual tie, with Trump prevailing by less than 1,800 votes.

“After tonight, America now has a clear choice going forward,” Cruz told supporters in Houston. “Only two campaigns have a plausible path to the nomination, ours and Donald Trump’s. Nobody else has any mathematical possibility whatsoever.”

Rubio, who won only two primary contests in Minnesota and Puerto Rico, had been banking on a win in his home state. But Trump carried 46 percent to Rubio’s 27 percent, with Cruz at 17 percent and Ohio Governor John Kasich at 7 percent.

Speaking to supporters in Miami after the television networks called the race for Trump, Rubio said “it is clear that while we are on the right side, this year we will not be on the winning side.”

“The fact that I’ve even come this far is evidence of how special America is,” he said.

A short time later, Cruz saluted Rubio’s campaign effort and made a direct pitch for his voters.

“To those who supported Marco, who worked so hard, we welcome you with open arms,” Cruz said.

In the Democratic primary in Florida, Clinton rolled up 65 percent, to 33 percent for U.S. Senator Bernie Sanders of Vermont. The race in North Carolina was closer, with Clinton at 55 percent and Sanders at 41 percent.

With those wins, Clinton has now taken 13 of the 14 Southern states, with only West Virginia left. Trump has taken 11, losing only Texas and Oklahoma to Cruz.

Voters in West Virginia go to the polls May 10.

Both senators vie to be final alternative to Donald Trump
♦By Rich Shumate, Chickenfriedpolitics.com editor

(CFP) — The two Southerners left in the Republican presidential race may have failed to stop Donald Trump’s bandwagon in the Super Tuesday primaries, but both U.S. Senators Ted Cruz and Marco Rubio are insisting that the results make them the most viable alternative to the New York billionaire.

Despite those mixed results, both Cruz and Rubio made it clear that they are staying in the race. And while Rubio didn’t talk about Cruz on election night, Cruz made a direct appeal for Rubio and the other candidates to drop out to give him a clear shot at Trump.

“So long as the field is divided, the nomination of Donald Trump becomes more likely, and that would be a disaster,” Cruz told supporters in Stafford, Texas, near Houston.

Addressing the other candidates, he said, “I ask you to prayerfully consider our coming together, uniting.”

“That is the only way to beat Donald Trump. Head-to-head, our campaign beats Donald Trump resoundingly.”

But down in Miami, a defiant Rubio denounced Trump as a “con artist” and made it clear he doesn’t plan to leave the race.

Rubio insisted that his stepped-up campaign of attacks against Trump has begun eroding Trump’s poll numbers, and he said he was looking forward to the March 15 primary in his home state of Florida.

“Two weeks from tonight, right here in Florida, we are going to send a message loud and clear,” he said.

LAS VEGAS (CFP) — After a third-place finish in the Nevada caucuses, U.S. Senator Ted Cruz of Texas looked forward to the pivotal Super Tuesday primaries, touting himself as the “one proven consistent conservative” remaining in the GOP presidential race. 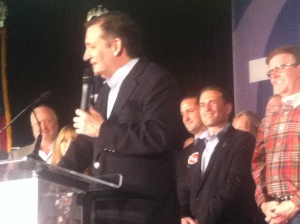 “Elections are about choice, and there are clear choices in this race,” Cruz told supporters at a YMCA in Las Vegas on caucus night, where he pledged to be the candidate who says no to bipartisan corruption, stand up to special interests and lobbyists and rein in debt.

Cruz also assured the Nevada crowd that, as a Texan, he understands how “folks in Nevada kind of like their guns” and is counting on Americans in Super Tuesday states feeling the same.

On international issues, Cruz emphasized his opposition to the Iran nuclear deal, which he vowed to “rip to shreds” on his first day as president. He also said his administration would “stand unapologetically alongside the nation of Israel.”

Cruz also framed himself as the candidate who can best fight Islamic terrorism and “keep American safe.”

Cruz finished behind Donald Trump and U.S. Senator Marco Rubio in the Silver State, winning six delegates. He is now moving into Super Tuesday on March 1, when 13 states will hold primaries or caucuses.

Among those states is Texas, where polls show Cruz locked in a battle with Trump for the Lone Star State’s 155 delegates.

U.S. Senator Marco Rubio stumps in Nevada ahead of caucuses

Ranking Nevada Republicans joined the presidential hopeful in one of the most definitive signs of establishment encouragement any conservative candidate has enjoyed. With what began with only Lt. Governor Mark Hutchenson, Rubio’s endorsements have increased to include State Senate Majority Leader Michael Roberson, who is running for the U.S. House, and U.S. Senator Dean Heller.

This event was the first for Heller as a Rubio supporter, as he initially endorsed Jeb Bush. While conceding, “others could attest it took (him) a little bit longer” to join the Rubio campaign, Heller still proclaimed “this is Marco Country we are in today.”

Heller noted that Rubio’s diverse range of legislative endorsements makes his campaign distinct: “There’s a reason why Marco Rubio gets the support of his colleagues in Washington D.C.” because he “is the real deal America needs.”

Upon arriving on stage, Rubio welcomed supporters who have “been with us for so long” and “others (like Heller) who have come on out team in the past few days.”

Expressing confidence in his standing in Nevada, Rubio focused on the viability of Democratic candidates and the gravity of the 2016 election, which he framed as deciding “what kind of country will America be in the 21st century.”

The two possibilities Rubio offered were a country in decline or a country that reaches new heights. Espousing the latter, Rubio pledged to unify the party through new conservatism.

Forecasting defeat if the party is divided entering the autumn, Rubio said he is the only candidate able to unite the GOP. Recognizing that “there are not enough of us,” Rubio shared his plan to expand and grow his “conservative movement.”

Rubio extolled free enterprise as “the greatest economic system” and the only way to help people who have been told for decades that Republicans do not care about them. He said free enterprise seeks to make “poor people richer without making rich people poorer.”

Rubio also pledged that if elected, he would wage a “real war on terror,” based on honesty and intelligence. Expressing dedication to members of the American military and their families, Rubio committed himself to providing for veterans and also said anyone who lied to grieving military families is disqualified from holding office as commander-in-chief.

Rubio, who spent part of his childhood living in Las Vegas, said the experience helped his family “discover the American dream” and helped him learn that many Americans are only a “generation or two removed” from people who immigrated into the United State and sacrificed for the current generation to seize modern opportunities.

“The time has come for this generation to do its part,” he said.

Meanwhile, former Florida Governor Jeb Bush–who had been the front-runner early in the 2016 race–dropped out after finishing a distant fourth in the February 20 vote.

That leaves Rubio and Cruz as the only Southerners left in the race for the White House, which at one point had featured nine candidates from the region.

The two senators each took 22 percent in the Palmetto State, running 10 points behind the winner, Donald Trump. Rubio’s margin over Cruz was less than 1,100 votes. out of nearly 738,000 cast.

But after finishing fifth in New Hampshire, catching Cruz was a significant coup for Rubio in his quest to become the mainstream alternative to Trump, particularly now that Bush is out of the race.

“After tonight, this has become a three-person race, and we will win the nomination,” Rubio told supporters at a rally in Columbia, where he was flanked by South Carolina Governor Nikki Haley. Her endorsement of Rubio in the closing days of the campaign is being credited with helping his strong finish.

But across town, Cruz, who won Iowa and came in third in New Hampshire, insisted that it was his campaign that had defied expectations.

“The screaming you hear now from across the Potomac is the Washington cartel in full terror that the conservative grassroots are rising up,” Cruz said.

However, while both senators were claiming a moral victory, Trump not only won statewide but in all six congressional districts, which means that under the rules of the South Carolina GOP, he will get all 50 of the delegates up for grabs.

An emotional Bush announced his departure to supporters in Columbia after winning less than 8 percent of the vote. He finished sixth in Iowa and fourth in New Hampshire.

“I’m proud of the campaign that we’ve run to unify our country and to advocate conservative solutions that would give more Americans the opportunity to rise up and reach their God-given potential,” he said. “But the people of Iowa and New Hampshire and South Carolina have spoken, and I really respect their decision.”

The son and brother of presidents, Bush started the race as the early front-runner, fortified by a super-PAC that had raised more than $100 million. But Trump’s entry into the race took the wind out of Bush’s political sails, and he never recovered.

Bush also had to deal with a challenge from Rubio, who had been a close political ally when they served together in Tallahassee.

After Bush’s withdrawal, Rubio offered an olive branch, expressing his “incredible affection and admiration” for a man he called “the greatest governor in the history of Florida.”

“Jeb Bush has many things to be proud of,” Rubio said.

Cruz, too, spoke warmly about Bush, saying he had brought “honor and dignity” to the race and that he was “a man who didn’t go to the gutter and engage in insults and attacks”–a not-too-veiled swipe at the front-running Trump.