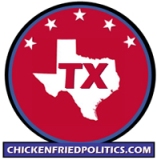 AUSTIN (CFP) — Media organizations have been trumpeting results of a new poll that purports to show President Donald Trump trailing former Vice President Joe Biden in Texas — a somewhat shocking result, given that a Democrat hasn’t carried the Lone Star State since 1976 and hasn’t been close since 1996.

But a closer look at the numbers of the Quinnipiac Poll show that, from a purely statistical perspective, those reports may be misleading.

The poll, released June 5, found Biden leading Trump by a margin of 48-44 percent among registered voters in Texas, with a margin of error of plus or minus 3.4 percent.

Because those two intervals overlap, it is statistically possible that Trump is actually ahead, as the high end of his support is above the low end of Biden’s support. So although it is probable that Biden has a lead, because the range of his support is higher, the poll does not absolutely establish a lead for Biden.

In order to establish with statistical certainty that Biden is leading Trump, his lead would need to be at least 6.8 percent, or double the margin of error.

The poll’s results for hypothetical match-ups of Trump with other Democratic 2020 contenders are even more muddled because neither candidate has a lead larger than the margin of error, which means that no one can even be said to even probably be ahead.

The poll results do, however, indicate that at this early stage of the race, the battle for Texas is closer that what might be expected and Biden appears to be performing more strongly against Trump than other 2020 competitors, including two Texans, former U.S. Rep. Beto O’Rourke and former San Antonio Mayor Julián Castro.

The Quinnipiac poll did turn up one result well beyond the margin of error — 60 percent of Texas don’t want to see Trump impeached, while only 34 percent do.

“The challenges that we face right now — the interconnected crises in our economy, our democracy and our climate — have never been greater,” O’Rourke said in an announcement video posted on social media. “They will either consume us, or they will afford us the greatest opportunity to unleash the genius of the United States.”

O’Rourke, who raised more than $80 million dollars in his unsuccessful bid to unseat Republican U.S. Senator Ted Cruz in 2018, promised to run “the greatest grassroots campaign this country has ever seen.”

“This is going to be a positive campaign that seeks to bring out the very best from every single one of us, that seeks to unite a very divided country,” he said.

In his announcement video, O’Rourke did not mention President Donald Trump by name, but he did draw a sharp contrast between himself and the president on Trump’s signature issue, immigration.

“If immigration is a problem, it is the best possible problem to have, and we should ensure that there are lawful paths to work, to be with family and to flee persecution,” he said.

Asked about O’Rourke’s announcement, Trump made light of the Texan’s propensity to use his hands as he speaks.

“I think he’s got a lot of hand hand movement. I’ve never seen so much hand movement,” Trump told reporters at the White House, “I said, ‘Is he crazy, or is that just the way he acts?'”

After posting his kickoff video, O’Rourke traveled to Iowa, which will hold the first caucuses in the 2020 election calendar. A formal campaign kickoff is scheduled for March 30 in his hometown of El Paso.

O’Rourke, 46 — whose given name is Robert but who goes by a childhood Spanish nickname, Beto — served three terms in the U.S. House representing metro El Paso before launching his campaign to unseat Cruz in 2017.

Given little chance when the race began, O’Rourke’s campaign caught the imagination of liberal activists around the country, allowing him to outraise Cruz and put what had been considered a safe seat in jeopardy.

Trump, who had a famously frosty relationship with Cruz when they competed for the White House in 2016, came to Texas to campaign for the senator as the race narrowed.

O’Rourke’s decision to pursue the presidency is good news for Texas’s other U.S. senator, Republican John Cornyn, who had already begin preparing for a challenge from O’Rourke in 2020.

RICHMOND (CFP) — Virginia Governor Ralph Northam says he’s “deeply sorry” for posing in a racist costume while a medical student in 1984, after a photo surfaced Friday on a conservative website, prompting calls from both left and right for his resignation.

“I am deeply sorry for the decision I made to appear as I did in this photo and for the hurt that decision caused then and now,” the Democratic governor said in a statement issued by his office after the photo was published. 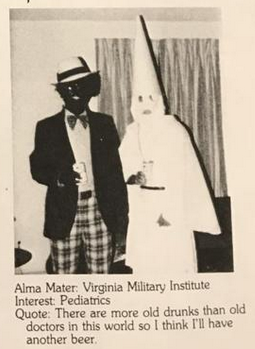 “This behavior is not in keeping with who I am today and the values I have fought for throughout my career in the military, in medicine, and in public service. But I want to be clear, I understand how this decision shakes Virginians’ faith in that commitment.”

Northam did not directly address his future in office, but he did say that “I recognize that it will take time and serious effort to heal the damage this conduct has caused. I am ready to do that important work.”

But the Republican Party  of Virginia called on the governor to resign, as did the liberal activist group Move On.org, the NAACP and at least two 2020 Democratic presidential candidates, U.S. Senator Kamala Harris and Julián Castro, the former mayor of San Antonio.

“Racism has no place in Virginia,” said Jack Wilson, state GOP chairman, in a statement. “These pictures are wholly inappropriate. If Governor Northam appeared in blackface or dressed in a KKK robe, he should resign immediately.”

“Leaders are called to a higher standard, and the stain of racism should have no place in the halls of government,” Harris said in tweet. “The Governor of Virginia should step aside so the public can heal and move forward together.”

If Northam resigns, Lieutenant Governor Justin Fairfax, who is African American, would take over as the commonwealth’s chief executive.

The photo was published in a yearbook for students at Eastern Virginia Medical School in Norfolk, from which Northam graduated in 1984.

The yearbook page is headlined with Northam’s name and contains two pictures of Northam, along with a third photo in which one man is wearing blackface and another is dressed in Ku Klux Klan regalia.

Northam’s statement acknowledges that one of the two men in the photo is him, although it did not say which one.

The page also contains a personal quote from Northam: “There are more old drunks than old doctors in this world so I think I’ll have another beer.”

The photo first surfaced on a conservative website, Big League Politics, which did not indicate the source of the material.

Northam had come in for blistering criticism from conservatives over the past week for his comments in support of a bill in the Virginia legislature that would have made it easier for a woman to obtain a late-term abortion.

Northam, 59, grew up on a farm on Virginia’s southeastern shore. After graduating from medical school, Northam served as a physician in the Army before entering private practice as a pediatric neurologist.

He was elected as governor in 2017, after serving a term as lieutenant governor and six years in the Virginia Senate. In his four election campaigns for state office, the yearbook photo never surfaced.

Fairfax, 39, was elected lieutenant governor in 2017, after making an unsuccessful run for attorney general in 2013.

SAN ANTONIO (CFP) — Telling supporters that he wants to “make sure that the promise of America is available to everyone in this country,” former San Antonio Mayor Julián Castro launched his campaign for the 2020 Democratic presidential nomination. 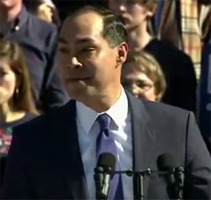 “It’s time for new leadership, it’s time for a new commitment to make sure that the opportunities I’ve had are available to every American,” he said in his January 22 kick-off with supporters in the mostly Latino West Side neighborhood of San Antonio, where he grew up.

“There are no front-runners that are born here, but I’ve always believed that with big dreams and hard work, anything is possible in this country,” he said.

Castro, the grandson of immigrants from Mexico, lit into President Donald Trump’s policy of trying to dissuade asylum seekers from Latin American countries from trying to cross into the United States, which Castro described as “cruel.”

“After (Trump) claimed that we are facing an invasion at the border, he called it a national security crisis,” Castro said. “Well, there is a crisis today. It’s a crisis of leadership.”

“Donald Trump has failed to uphold the values of our great nation.”

He also drew another contrast with Trump by thanking the news media assembled to cover the rally, saying, “I know that the press work hard and that they are the friend of the truth in this country.”

Castro, 44, served as mayor of Texas’s second-largest city from 2009 to 2014 before being picked as President Barack Obama’s housing secretary in 2014. He was reportedly on the short-list to be Hillary Clinton’s running mate in 2016.

His identical twin brother is U.S. Rep., Joaquin Castro, who represents the West Side in Congress.

Castro is the second Southerner to enter what is expected to be a crowded 2020 Democratic field, joining Richard Ojeda, a former state senator and unsuccessful congressional candidate from West Virginia.

Another Texan, former U.S. Rep. Beto O’Rourke, who lost a Senate race in 2018, is considering the race. Other Southerns who have been mentioned include former New Orleans Mayor Mitch Landrieu, U.S. Senator Mark Warner of Virginia, and former Virginia Governor Terry McCauliffe.