RALEIGH (CFP) — Voters across North Carolina will pick their nominees Tuesday for a pivotal U.S. Senate race that could determine party control, and voters in the western panhandle will decide if Republican U.S. Rep. Madison Cawthorn’s political career gets derailed after a string of controversies and bad headlines. 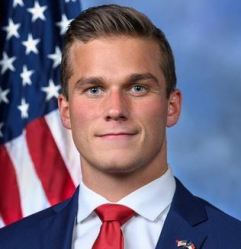 Nominees will also be selected for U.S. House seats being contested under new maps. Three open seats have drawn crowded fields, which include American Idol finalist Clay Aiken – making his second run for Congress — and former Republican U.S. Rep. Renee Elmers, who is trying to make a comeback after losing her seat in 2016.

Local and legislative seats are also up Tuesday; statewide offices are not on the ballot this year.

Budd has been vocally backed by Donald Trump, who came to the Tar Heel State to campaign for him. Under state law, he only needs 30% of the vote to avoid a runoff, and recent polling indicates he’s likely to clear that threshold.

Eleven Democrats are running for their party’s nomination. Former State Supreme Court Chief Justice Cheri Beasley – who has raised nearly $10 million for the race – is the prohibitive favorite.

North Carolina is considered as one of the Democrats’ prime pick-up opportunities in the fall, which will make the likely race between Budd and Beasley a high-decibel, high-spending affair that gets outsized national attention.

In the state’s 11th U.S. House district, which takes in 15 counties in the western end of the state, Cawthorn – elected to office in 2020 at just 25 — is battling for his political life against seven Republican challengers and the active opposition of state GOP leaders, including U.S. Senator Thom Tillis.

He also raised eyebrows by dismissing of Ukrainian President Volodymyr Zelenskyy as a “thug” and has been featured in a photo wearing women’s lingerie and in a video naked in bed with a male friend.

He also made a political blunder by abandoning the 11th District to run in a neighboring district, then reversing course after a state court drew a new map that obliterated his new district.

However, Cawthorn has strong name recognition, a fervent following in the MAGA base and, perhaps most importantly, the backing of Trump – which could be enough to clear the 30% threshold and avoid a runoff.

His chief Republican competitors are State Senator Chuck Edwards of Hendersonville and Michelle Woodhouse, the Republican party chair in the district.

Here is a look at some other U.S. House races on the ballot Tuesday.

1st District: Incumbent Democratic U.S. Rep. G.K. Butterfield gave up this seat in eastern North Carolina after Republican state legislators made the seat more Republican, setting off a scramble in both parties. Although the state Supreme Court later reserved some of those changes, there are still four Democrats and eight Republicans in the race.

Among the Democrats are State Senator Don Davis and former State Senator Erica Smith, who got out of the U.S. Senate race to run here instead. On the Republican side, Rocky Mount Mayor Sandy Roberson and Sandy Smith, a farmer and businesswoman from Nash County, have both raised more than $1 million for the race.

4th District: Incumbent Democratic U.S. Rep. David Price is retiring in this district, which includes Durham and Chapel Hill, drawing a field of eight Democrats to succeed him, including Aiken, who contested a Raleigh-area district in 2014. Leading the field are State Senator Valerie Foushee from Chapel Hill and Durham County Commissioner Nida Allam, the first Muslim woman to win political office in North Carolina.

6th District: Incumbent Democratic U.S. Rep. Kathy Manning is trying to hang on to this seat, which became more Republican under the final court-drawn map. Seven Republicans are vying to take her on; the GOP fundraising leader is Christian Castelli, a businessman and former U.S. Army Special Forces officer from Randolph County.

13th District: This newly configured, Republican-leaning district, centered in suburban Raleigh, has drawn eight Republicans, including Ellmers, and five Democrats. Trump waded into this district to endorse Bo Hines, a 26-year-old political newcomer and former college football star who did not live in the district before running here, a move that angered local Republicans.

RALEIGH (CFP) – North Carolina’s Supreme Court has struck down political maps drawn by Republican legislators to maximize their political advantage over the next decade, a victory for Democrats in one of the country’s most evenly divided swing states.

In a February 4 decision, the high court, which has a 4-to-3 Democratic majority, said maps drawn for U.S. House seats and state legislative districts were gerrymandered for political reasons in violation of the state constitution.

The court gave legislators just two weeks, until February 18, to redraw the maps, or a lower court will take over the process. It did not delay the scheduled May 17 primary but said that election must use the new maps.

“Achieving partisan advantage incommensurate with a political party’s level of statewide voter support is neither a compelling nor a legitimate governmental interest,” said the majority ruling, penned by Associate Justice Robin Hudson, a Democrat.

The court also ordered legislators to avoid chopping up counties into multiple districts whenever possible – a direct shot at the Republican map, which divided Mecklenberg and Guilford counties into three districts each to dilute the Democratic vote in Charlotte and Greensboro.

In a sharply worded dissent, Chief Justice Paul Newby, a Republican, accused the court’s Democratic majority of usurping the legislature’s power to decide redistricting, suggesting that amounted to “judicial despotism”

“A majority of this court … tosses judicial restraint aside, seizing the opportunity to advance its agenda,” Newby wrote.

North Carolina is one of just six states where judges are elected on a partisan basis.

Although North Carolina is closely competitive between Democrats and Republicans, the U.S. House map drawn by Republican legislators would have likely given the GOP 10 of the state’s 14 seats, compared to the current line-up of eight Republicans and five Democrats. (The state gained a new seat during reapportionment after the 2020 census.)

The legislative maps would also have cemented Republican control of both houses of the legislature over the next decade.

Democratic Governor Roy Cooper did not have the power to veto the maps, drawn by Republicans who control both houses of the legislature, forcing Democrats to go to court to try to reverse them.

The biggest beneficiary of the court’s decision may be freshman Democratic U.S. Rep. Kathy Manning, whose district in Greensboro and Winston-Salem was dismembered in the invalidated map. She had not announced her re-election plans, pending resolution of the legal challenge.

Another Democrat, U.S. Rep. G.K. Butterfield –- a former chair of the Congressional Black Caucus who sat on the state Supreme Court before his election to Congress — retired after legislators made his district in rural Eastern North Carolina more competitive by reducing its population of black voters.

Democratic U.S. Rep. David Price from Chapel Hill also announced his retirement, even though his district was left largely intact.

After Republican legislators passed their map, U.S. Rep. Madison Cawthorn announced that he would leave his current district in far Western North Carolina and run instead in a more Republican district just to the east that included suburban Charlotte. Those plans may be upended once the map is redrawn.

Another candidate who may be affected is Clay Aiken, the “American Idol” finalist who announced he would run as a Democrat for Price’s seat. Although the new map is not likely to change that district, had it stood, Aiken may have faced a primary contest against Manning, rather than a easier run for an open seat.

Cooper hailed the court’s decision in a statement, saying “a healthy democracy requires free elections and the NC Supreme Court is right to order a redraw of unconstitutionally gerrymandered districts.”

“More work remains and any legislative redraw must reflect the full intent of this decision,” he said.

But Republican State Senator Ralph Hise, chair of the Senate’s redistricting committee, called the decision a “perverse precedent” that will be “nearly impossible to unwind.”

“Democratic judges, lawyers, and activists have worked in concert to transform the Supreme Court into a policymaking body to impose their political ideas,” Hise said.

CHARLOTTE (CFP) — The fields are now set for three competitive U.S. House races in North Carolina, including the 9th District where Republican U.S. Rep. Robert Pittenger has become the first incumbent to go down to defeat in the 2018 election cycle.

Pittenger. seeking his fourth term in Congress, was defeated in the May 8 primary by Mark Harris, a prominent Baptist pastor from Charlotte. Harris took 49 percent, to 46 percent for Pittenger.

“From the beginning, this race has been about giving the people of this district a voice, and you have stood up tonight across the 9th District, and you have made that voice loud and clear,” Harris told supporters at a victory celebration in Indian Trail.

Harris will now face Democrat Dan McCready in November for a metro Charlotte seat that Democrats have high hopes of flipping.

McCready, a Marine Corps veteran and solar energy entrepreneur, easily won the Democratic primary. The most recent Federal Election Commission reports show that he has so far raised $1.9 million for the fall race, about three times as much as Harris.

Harris is the former senior pastor of the First Baptist Church of Charlotte and former president of the State Baptist Convention of North Carolina. In 2012, he helped lead the fight for a state constitutional amendment outlawing same-sex marriage, and he made an unsuccessful bid for the U.S. Senate in 2014.

The race in the 9th District, which includes parts of Charlotte and its southern and eastern suburbs and stretches east to Fayetteville, was a rematch of a primary battle between Pittenger and Harris in 2016 that the incumbent won by just 134 votes; this time, Harris won by 814 votes.

Pittenger had the backing of House Republican leaders, and Vice President Mike Pence came to North Carolina to campaign for him. Harris countered with anti-establishment campaign that painted Pittenger as part of the Washington “swamp.”

In addition to the 9th District, Democrats are eyeing two other seats, the 2nd District and the 13th District, in an attempt to cut into the GOP’s dominance in the Tar Heel State’s congressional delegation, where Republicans hold 10 of 13 seats.

Coleman, a former state representative and Wake County commissioner, was the unsuccessful Democratic nominee for lieutenant governor in both 2012 and 2016. However, she starts the general election with a substantial financial disadvantage against Holding, who is seeking his fourth term.

That is not the case in the 13th District, where the Democrats’ nominee, Kathy Manning, has raised $1.3 million and has $1 million in cash on hand, outstripping the Republican incumbent, U.S. Rep. Ted Budd, who has raised $880,000 and has just $362,000 on hand, according to FEC records.

Manning, a lawyer from Greensboro, is making her first bid for elective office in the district, which stretches from the northern suburbs of Charlotte to Greensboro. Budd, first elected in 2016, is trying to win a second term.