WASHINGTON (CFP) — With a sixth U.S. House Republican from Texas opting not to run for re-election in 2020, the pending departures have earned a new nickname in Washington — a “Texodus.”

U.S. Rep. Mac Thornberry — one of the few Republicans left who rolled into Washington in the party’s “Contract with America” sweep in 1994 — announced his retirement September 30, joining five home-state colleagues who had earlier announced they would not see re-election.

“It has been a great honor to serve the people of the 13th District of Texas as their congressman for the last 25 years,” Thornberry said in a statement announcing his retirement.  “We are reminded, however, that ‘for everything there is a season,’ and I believe that the time has come for a change.”

While Thornberry’s district, which sprawls from the Dallas Metroplex to the Panhandle, is heavily Republican and unlikely to fall into Democratic hands, his departure is the latest in a string of retirements that have reshaped the Lone Star State’s congressional delegation.

Thornberry and the five other Texas House Republicans who have announced their retirements this year have, together, more than 80 years of seniority. And of the 25 Republicans elected to the state’s delegation in 2016, only 11 will be left standing after 2020 — if no one else retires or loses. Eight retired or lost their seats in 2018.

The other GOP members retiring in 2020 are Mike Conaway, Bill Flores, Pete Olson, Will Hurd, and Kenny Marchant. All but Hurd had been in the House for more than a decade.

Thornberry had chaired the House Armed Services Committee before Republicans lost their majority in 2018 and currently serves as ranking member. However, term limits imposed by the Republican conference would have forced him out of that role after 2020, which means he would not have reclaimed his chairmanship even if Republicans took back the House.

Conway faced the same situation on the House Agriculture Committee.

Of the six seats being vacated, Conaway and Thornberry’s are safely Republican, and the next occupant will be decided in the GOP primary next March. But the other four are on the target list for Democrats, who hope to build on the two-seat gain they made in Texas in 2018.

Two other Texas House Republicans, both representing Austin-area districts, are on the retirement watch list — Michael McCaul and John Carter, who are also being targeted by Democrats. However, both men have been raising money for their re-election campaigns.

Candidates have until December 9 to decide whether to run for re-election — or ride off into the Texas sunset.

Texas Republican U.S. Rep. Will Hurd bowing out of the House

In a surprise move, the chamber’s lone black Republican and sometime Trump critic says he plans “to help our country in a different way”

WASHINGTON (CFP) — Just two weeks after voting with Democrats to condemn President Donald Trump over his tweets about four liberal House members, Republican U.S. Rep. Will Hurd of Texas has announced that he will not seek re-election in 2020, opening up a prime pickup opportunity for Democrats in West Texas.

Hurd, a former undercover CIA agent who had been considered a rising star among House Republicans before his surprise announcement, said in a statement that he was leaving “in order to pursue opportunities outside the halls of Congress to solve problems at the nexus between technology and national security.” 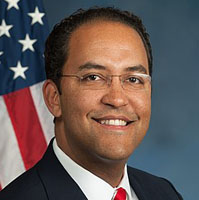 While his statement did not indicate any future plans, Hurd told the Washington Post that he did intend to run for office again in the future — and that despite his criticism of the president, he planned to vote for Trump if he is the GOP nominee as expected in 2020.

“It was never my intention to stay in Congress forever, but I will stay involved in politics to grow a Republican Party that looks like America,” he said in his statement.

Hurd is the third Texas House Republican to forgo re-election next year, joining U.S. Reps. Pete Olson and Michael Conaway. Hurd’s seat, in Texas’s 23rd District, which he won by a mere 926 votes in 2018, is by far the most vulnerable.

Hurd, 41, was something of a political unicorn in Congress. Not only was he the only African-American Republican in the House — and one of only two in Congress — he was also a Republican representing a district that is more than 70 percent Latino, which he said gave him the opportunity to take “a conservative message to places that don’t often hear it. ”

“Folks in these communities believe in order to solve problems we should empower people not the government, help families move up the economic ladder through free markets not socialism and achieve and maintain peace by being nice with nice guys and tough with tough guys,” he said in his statement. “These Republican ideals resonate with people who don’t think they identify with the Republican Party.”

Hurd was also the last Southern Republican left in Congress representing a district Hillary Clinton carried, albeit narrowly, in 2016.

As a member of the House Intelligence Committee, Hurd questioned special counsel Robert Mueller during his July 24 appearance to discuss his investigation into Russian meddling in the 2016 election, offering a less confrontational line of questioning than many of his fellow Republicans on the panel.

Last month, Hurd was the only Southern Republican — and one of only four in the House — who broke ranks to support a resolution condemning Trump over tweets he made about four far-left congresswomen known as “The Squad,” which were widely denounced as racist by the president’s critics.

The 23rd District is the largest geographically in Texas, stretching from the suburbs of San Antonio across rural West Texas toward El Paso, and one of the most consistently competitive seats anywhere in the country.

Hurd’s victory in 2014 marked the fourth time in a decade that the seat had switched between parties. He managed to hold it for three election cycles, although never winning by more than 3,000 votes.

The Democratic candidate for the seat in 2018, Gina Ortiz Jones, is running again in 2020, and Hurd was facing another difficult election fight to keep the seat, including, after his criticism of Trump, a possible primary challenge.

Conaway’s district, the 11th, which includes Midland, Odessa and San Angelo, is strongly Republican and will likely not change hands with his retirement. Olson’s district, the 22nd, in the suburbs of Houston, is more vulnerable to a Democratic challenge.

WASHINGTON (CFP) — When it comes to Southern clout in the U.S. House, what a difference an election makes.

In the recently departed Congress, with Republicans in control, 13 of the 22 committee chairs hailed from the 14 Southern states; in the newly installed Congress, with Democrats in charge, that number will fall to just five.

Five Southern Republican chairs retired, and one, Pete Sessions of Texas, went down to defeat in November. Those who stayed find themselves in the minority for the first time in eight years.

The switch in control has shifted power from the GOP, in which Southerners made up nearly half of the caucus, to the Democrats, where Southerners only make up a fifth. And that has led to reduced numbers of Southerners among committee chairs.

Also, the outgoing majority whip, Republican Steve Scalise of Louisiana, will be replaced by the incoming majority whip, Democrat Jim Clyburn of South Carolina. Both men remain the only Southern members in their party’s top leadership.

But eight other committees that had GOP chairmen will now be headed by lawmakers from outside the region. And that list contains a number of the most powerful and high-profile chairmanships in Washington, including Judiciary, Rules, Ways and Means, and Oversight and Reform.

Unlike Republicans, who select committee chairs by voting within the caucus, Democrats use seniority. All five of the Southern Democrats ascending to chairmanships had been the ranking Democratic member when Democrats were in the minority.

Scott, Thompson and Johnson, all members of the Congressional Black Caucus, are among eight new chairs who are African American or Latino. In the departing Republican Congress, all of the chairs were white, and 20 were men.

Among the notable newcomers to that group are Kay Granger of Texas, who will be ranking member on Appropriations, and Doug Collins of Georgia, on Judiciary–the committee that would handle any impeachment proceedings against President Donald Trump.

Michael McCaul of Texas, who had been chairman of Homeland Security, has shifted to become the new ranking member of Foreign Affairs.

Six Southern Republicans who had been chairs of their committees will continue as ranking members in the new Congress–Mike Conaway of Texas, Agriculture; Mac Thornberry of Texas, Armed Services; Steve Womack of Arkansas, Budget; Virginia Foxx of North Carolina, Education and Labor; Phil Roe of Tennessee, Veterans’ Affairs; and Kevin Brady of Texas, Ways and Means.