JACKSON, Mississippi (CFP) – Two sitting Republican Mississippi U.S. House members have been forced into primary runoffs after weak primary performances and will now have to battle to keep their seats on June 28. 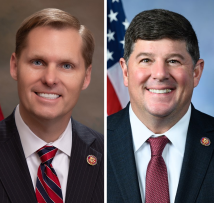 In the 3rd District, U.S. Rep. Michael Guest — one of just 35 Republican House members to vote in favor of an independent bipartisan investigation of the January 6, 2021 riot at the U.S. Capitol – trails Michael Cassidy, a Navy aviator making his first run for political office.

Cassidy’s margin over Guest was less than 600 votes, with neither winning the majority needed to avoid a runoff due to a third candidate in the race.

In the 4th District, U.S. Rep. Steven Palazzo — under investigation by the House Ethics Committee over allegations that he misused campaign funds and used his office to aid family members – drew an anemic 32% in his re-election bid against a field of six challengers.

He will face a runoff with Jackson County Sheriff Mike Ezell, who came in second about 1,500 votes ahead of Clay Wagner, a banker from Bay St. Louis.

Guest’s campaign faced headwinds over his over his vote on the January 6th independent commission, even though he later voted against the current House investigation led by Democrats.

Cassidy billed himself as the “America First” candidate, echoing Donald Trump’s unfounded claims of voting fraud in the 2020 election. However, Trump did not endorse in the race; he had endorsed Guest in 2020.

The 3rd District stretches across central Mississippi from the Jackson suburbs to Meridian.

Palazzo’s opponents in the 4th District hammered him over a long-running ethics investigation and what they see as his inattention to the district, which has garnered him the nickname “No-Show Palazzo.”

He ran a low-profile campaign, skipping candidate forums with his opponents. But he did have Trump’s endorsement.

Ezell, who touted his 40-year law enforcement career on the campaign trail, has served as sheriff in Jackson County on the Gulf Coast since 2014 and was re-elected without opposition in 2019.

The 4th District includes the state’s southeast panhandle, including the cities of Biloxi, Gulfport, Pascagoula and Hattiesburg.