But he needs Republican support to get anything through the legislature — and GOP leaders are giving a frosty reception to a sure-to-be contentious initiative from the commonwealth’s politically wounded chief executive. 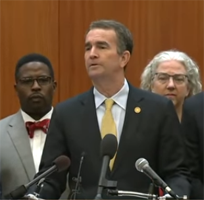 Saying “no one should go to work, to school or to church wondering if they will come home,” Northam announced at a June 4 news conference that he will call state lawmakers in a special session to consider gun control measures, including universal background checks and limits on ammunition magazines.

However, Republicans control both houses of the legislature, and GOP leaders quickly pushed back.

House Speaker Kirk Cox called the special session “hasty and suspect when considered against the backdrop of the last few months” — a not-so-subtle reference to Northam’s ongoing political troubles since a photo surfaced in January of a man in blackface on his medical school yearbook page.

Northam has since resisted calls for him to resign, including from a number of fellow Democrats.

The Republican Party of Virginia denounced Northam’s “gun-grab session” as “craven” and accused him in a statement of trying to “take advantage of this tragedy to try and boost his own disgraced image.”

Cox also noted that while the governor can summon lawmakers into special session, “he cannot specify what the General Assembly chooses to consider or how we do our work.”

“We intend to use that time to take productive steps to address gun violence by holding criminals accountable with tougher sentences — including mandatory minimums,” he said in a statement.

The governor said he would propose bans on magazines holding more than 10 rounds of ammunition, bump stocks and silencers; universal background checks; new “extreme risk” protective orders to keep guns out of the hands of people who might be violent; and a limit on purchases of handguns to no more than one a month.

Those proposals failed to pass in the last regular session of the legislature, but Northam said he would try to pass them again because “it is wrong, it is outrageous, it is unforgivable to turn our municipal centers, our schools, our churches and synagogues and mosques into battlefields.”

However, the National Rifle Association noted in a statement that “none of the governor’s gun control proposals would have prevented the horrible tragedy at Virginia Beach.”

According to police, the shooter who killed 12 people in a Virginia Beach municipal building had legally purchased his weapons and had no criminal convictions or mental health issues that would have resulted in a protective order.

He did, however, use a silencer, which may have contributed to the death toll by delaying the law enforcement response to the sound of gunfire.

The murders in Virginia Beach marked the second time the commonwealth has been rocked by mass violence.

In 2007, a mentally ill Virginia Tech student killed 32 people in two campus buildings, in what remains the deadliest school shooting in U.S. history.

By shumater in At The Statehouse, Virginia on June 5, 2019.
← Bluegrass feud: Kentucky lieutenant governor cries foul over dismissal of staff Poll showing Biden with a lead over Trump in Texas is not what it seems →