Voters in Kentucky, Mississippi and Virginia will cast ballots in off-year elections for state offices 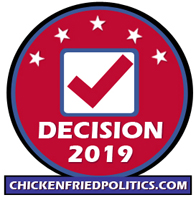 Voters in three Southern states will troop to the polls Tuesday to decide their state’s balance of power and give a first indication of how the current fractious state of American politics might play out in the 2020 election.

In Kentucky and Mississippi, Democratic candidates have a shot at wresting governorships out of GOP hands. In Virginia, Democrats will be trying to complete a takeover of state government by gaining the handful of seats they need to flip both houses of the legislature — which would give them unfettered power to draw political maps after the 2020 census.

Towering over all of these races is President Donald Trump, who has put his personal political prestige on the line by going all in for Republican candidates in Kentucky and Mississippi. Although Trump is not in any trouble in either state in 2020, Democrats will no doubt crow if Trump proves unable to carry his preferred candidates over the line.

In Kentucky, Republican Governor Matt Bevin is seeking re-election after a tumultuous four years in Frankfort that have left him among the nation’s least popular chief executives. He is being challenged by his archenemy, Democratic Attorney General Andy Beshear, who has repeatedly sued the governor and now hopes to replace him.

Bevin has tried to counter his low approval ratings by wrapping himself in the Trump mantle and painting Beshear as a far-left liberal, particularly on the issue of abortion. Bevin opposes legal abortion, which Beshear supports.

Beshear has countered by painting Bevin as a bully, particularly in his critical comments about public school teachers who have been protesting Republican-backed pension reform plans.

The other race of note in Kentucky is the contest to replace Beshear as attorney general between Republican Daniel Cameron, a protegé of Senator Majority Leader Mitch McConnell, and Democrat Greg Stumbo, who held the office from 2004 to 2008.

Although Republicans have become dominant in Kentucky politics in recent decades, the last time a Republican won a race for attorney general was 1943 — a streak of 15 consecutive wins that Cameron hopes to snap.

Cameron would also be the first African American to win a statewide race in Kentucky in his own right. (Current Lieutenant Governor Jenean Hampton was elected on a ticket with Bevin in 2015; he bounced her from his re-election ticket earlier this year.)

In Mississippi, two men who have served alongside each other in statewide office for the past 16 years, Republican Lieutenant Governor Tate Reeves and Democratic Attorney General Jim Hood, are facing off in the governor’s race.

Democrats, who haven’t won a governor’s race in the Magnolia State since 1999, are hoping that Hood — running to the right of national party on contentious social issues such as abortion and gun control — can break through against Reeves, who had to fight his way through a contentious GOP primary and runoff.

However, a wrinkle in Mississippi law may prove Hood’s undoing — to win, a candidate not only has to win the most votes on Tuesday but must also carry a majority of state House districts. If that threshold isn’t meant, the next governor will be selected by the Republican-controlled legislature, which will almost certainly give the job to Reeves.

The threshold requirement — implemented during the era of Jim Crow to prevent black candidates from winning statewide offices — is currently being challenged in federal court, a suit that will take on new resonance if Hood wins the most votes but doesn’t carry enough districts.

In Virginia, statewide offices aren’t on the ballot, but all 100 House seats and 40 Senate seats are up for grabs.

Currently, Republicans hold a narrow 21-19 in the Senate and a 51-49 majority in the House, which means a net shift of two seats in either house could switch it to Democratic control.

Virginia has been trending Democratic in recent years, and two years ago, Democrats made huge gains to nearly take control of the House while also sweeping statewide races for governor, lieutenant governor and attorney general.

Democrats haven’t controlled the House since 1997 or the Senate since 2014. Should they take both chambers Tuesday, it will be the first time since 1993 that Democrats have controlled the legislature and the governorship, which will allow them to redraw legislative and congressional districts after the 2020 census.

Virginia’s congressional delegation currently has seven Democrats and four Republicans, after Democrats flipped three GOP-held seats in 2018. Controlling reapportionment would allow Democrats to protect those gains by drawing more favorable maps, as well as drawing new maps to cement their control of the legislature.