Warnock gets an early boost from Stacey Abrams, who narrowly lost a governor’s race in 2018

ATLANTA — Atlanta pastor Ralphael Warnock, who holds the historic pulpit where both Martin Luther King Jr. and his father preached, has entered the special election race for a U.S. Senate seat held by Republican Kelly Loeffler, giving Democrats a high-profile candidate for a seat they have high hopes of flipping.

“I’ve committed my whole life to service and helping people realize their highest potential,” he said in a video announcing his campaign. “I’ve always thought that my impact doesn’t stop at the church door — that’s actually where it starts.” 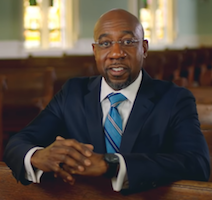 Warnock’s campaign launch came with a full-throated endorsement from Stacey Abrams, who energized Democrats nationally in a unsuccessful race for governor in 2018.

“Wherever there is need, Reverend Warnock can be found on the front lines,” Abrams said in a letter sent to her supporters. “And that’s where we need him at this moment. On the front lines of the battle for the soul of America.”

Since 2005, Warnock has been senior pastor at Atlanta’s historic Ebenezer Baptist Church, from which King helped lead the civil rights movement in the 1950s and 1960s. The Senate race is his first run for political office.

Loeffler was appointed to the Senate seat in December by Governor Brian Kemp to replace Republican Johnny Isakson, who retired due to ill health. Georgia voters will decide in November who fills the remaining two years of Isakson’s term; candidates from all parties will run in a special election, with the top two voter-getters facing each other in a runoff if no one gets a majority.

Warnock’s entry into the race further complicates Loeffler’s effort to hold the seat. She is already facing an intra-party challenge from U.S. Rep. Doug Colllins, who was passed over by Kemp when he filled the Senate vacancy.

Four other candidates will be competing with Warnock for Democratic votes: Matt Lieberman, a businessman from Cobb County and son of former Connecticut U.S. Senator Joe Lieberman; Ed Tarver, a former state senator and federal prosecutor from Augusta; Richard Winfield, a philosophy professor at the University of Georgia; and Tamara Johnson-Shealey, a nail salon owner and law student from DeKalb County.

The next wrinkle in the Senate race may take place in the Georgia legislature, where Collins supporters — with the backing of Democrats — are trying to push through a change in state law to hold party primaries instead of an all-parties special election, setting up a one-on-one match-up between Collins and Loeffler in a Republican-only electorate.

The change would also ensure that a Democrat would get a clean shot at either Loeffler or Collins, rather than battling them both.

Kemp has threatened to veto the bill. However, House Democrats have indicated they may support the change, which could create a veto-proof majority with just 45 out of the 104 Republicans in the House.

Georgia’s other Senate seat, held by Republican David Perdue, is also up in 2020. And while Georgians haven’t elected a Democrat to the Senate since 2000, the two Georgia seats could be key to Democrat’s hopes of overturning the GOP’s three-seat majority.