RICHMOND (CFP) — Virginia Democrats go to the polls Tuesday to pick their nominees for three statewide posts, with former Governor Terry McAuliffe expected to win a chance to reclaim that post and Attorney General Mark Herring trying to fend off a spirited primary challenge from the left.

State Democrats will also pick a nominee for lieutenant governor in a muddled six-person race with no clear front-runner, with the possibility that the all-male, straight, mostly white string of No. 2s stretching back 170 years could end with the state’s first-ever female, Jewish, gay or Latina lieutenant governor.

In-person voting opens Tuesday at 6 a.m., with polls closing at 7 p.m. Republicans opted to pick their nominees at a state convention in May, so there will be no GOP contests. 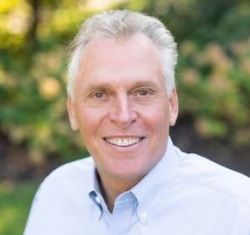 McAuliffe, 64, a Clinton confidante and prolific Democratic fundraiser, served as governor from 2014 to 2018 but was forced from office by a rule unique to Virginia that doesn’t allow governors to run for a second term.

If his comeback is successful, it will mark only the second time that a former governor has reclaimed the office (the other was Democrat Mills Godwin elected in 1965 and 1973).

Republicans picked political newcomer Glenn Youngkin as their nominee, who is trying to become the first Republican since 2009 to break the Democrats’ lock on the state’s top office.

Youngkin, 54, who lives in the Washington D.C. suburbs, is running as a Christian conservative and has been endorsed by Donald Trump. He made a fortune running a private equity company, giving him deep pockets to compete with McAuliffe’s fundraising prowess.

In the attorney general’s race, Herring, who is seeking a third term, is facing a stiff primary challenge from Delegate Jay Jones from Norfolk, who has centered his campaign on criminal justice reform, including repealing qualified immunity for police officers.

Jones’s upstart campaign has been boosted by endorsements from term-limited Democratic Governor Ralph Northam and New Jersey U.S. Senator Cory Booker, along with support from Democracy for America, a grassroots advocacy group on the Democratic left.

The winner of the primary will face Republican Delegate Jason Miyares from Virginia Beach.

Rasoul, who led the field in fundraising, represents Roanoke in the legislature and would become the first Muslim elected to statewide office in Virginia.

Ayala, from Prince William County, snagged endorsements from Northam and much of the Democratic establishment. She identifies as an Afro-Latina and would be the first Latina statewide nominee.

Levine, from Alexandria, would be the first openly gay and first Jewish nominee if he prevails Tuesday.

Virginia does not have primary runoff elections, so the candidate who wins a plurality Tuesday will win the right to face Republican Winsome Sears in November.

Sears, 57, who served a single term in the legislature nearly 20 years ago and hasn’t held office since, was the biggest surprise to come out of the Republican convention, dispatching five rivals.

A Jamaican immigrant and former Marine from Winchester, she served as national chair of Black Americans to Re-Elect President Trump in 2020, and her campaign posters and Twitter feed showed her carrying an assault rifle.

Since the lieutenant governorship became an elected office in the 1850s, all of its occupants have been men and all but two have been white. The incumbent, Justin Fairfax, is one of the two, along with Douglas Wilder, who went on to become governor.

Because of the single-term limit for governors, the lieutenant governorship is often a stepping stone to that office, as it was for Northam, who served under McAuliffle.