RALEIGH (CFP) — The North Carolina State Board of Elections has ordered a new election for the state’s 9th District U.S. House seat, after hearing four days of testimony about allegations of absentee ballot fraud by a operative working for Republican candidate Mark Harris.

The board’s unanimous February 21 decision came shortly after Harris, who had spent the morning answering questions, returned from a lunch break and called for a new election, saying poor health would not allow him to continue testifying. 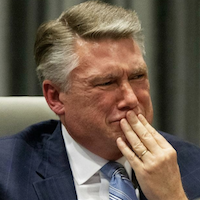 “Through the testimony I’ve listened to over the past three days, I believe a new election should be called,” he said. “It’s become clear to me that the public’s confidence in the 9th District seat general election has been undermined to an extent that a new election is warranted.”

However, Harris insisted that “neither I nor any of the leadership in my campaign were aware of or condone the improper activities that have been testified to.”

The board’s decision sets up a possible rematch between Harris and Democrat Dan McCready in the new election to fill the seat, giving Democrats another pickup opportunity.

However, it is not clear if Harris will be a candidate. He told the elections board that he had suffered two strokes while battling an infection in January and said he was not well enough to answer questions, calling into question if he could withstand a contentious campaign in the glare of the national spotlight.

“Though I thought I was ready to undergo the rigors of this hearing and am getting stronger, clearly I am not, and I struggled this morning with both recall and confusion,” he said.

In December, North Carolina’s Republican-controlled legislature changed state law to require a full primary election in the event the 9th District race was rerun, which gives the GOP the option of ditching Harris and nominating another candidate to face McCready.

McCready has raised more than $500,000 for a rematch in the contested race since December; Harris’s campaign had just $19,000 in cash and $86,000 in unpaid debt at the end of December, according to reports filed with the Federal Election Commission.

But the state elections board refused to certify the results amid allegations that a contractor hired by the Harris campaign, McCrae Dowless, had illegally collected absentee ballots in Bladen County, a rural outpost at the eastern end of the district.

Under state law, voters must mail or deliver completed absentee ballots themselves. The board heard testimony that Dowless and people working for him had collected the ballots and then submitted them. Questions were also raised about improprieties in applications for absentee ballots.

Until reversing course at the hearing, Harris had resisted calls by McCready and Democrats for a new election in the 9th District, which includes the suburbs of Charlotte and rural areas to the east toward Fayetteville.

His lawyers and Republican officials had argued that the results should be certified despite the fraud allegations because the number of absentee ballots in question was not sufficient to change the outcome.

The most dramatic testimony during the four-day hearing came from Harris’s son John, a federal prosecutor. He testified that he had warned his father against using Dowless as an operative in the campaign because he was a “shady character.”

Harris sat crying as he watched his son’s testimony, which contradicted his previous assertions that the allegations of illegal activity by Dowless came as a surprise.

No Republican has yet come forward to launch a challenge to Harris. Two possibilities, former Governor Pat McCrory and former U.S. Rep. Robert Pittenger, who was defeated by Harris in the Republican primary in 2018, have both taken themselves out of the running.

McCready, 34, a former Marine officer and businessman, is not expected to face any challengers on the Democratic side.

If McCready wins the rematch, the 9th District will be the only North Carolina seat to shift from Republican to Democrat and would be the 11th Southern seat to shift in the 2018 cycle. Republicans hold a 101-to-50 advantage in House seats across the 14 Southern states.