MOBILE (CFP) — U.S. Rep. Bradley Byrne has become the first Republican to enter the 2020 U.S. Senate race in Alabama, drawing a contrast between what he called “bedrock” Alabama values and the priorities of Washington — and between his positions and those of the  Democrat now holding the seat, Doug Jones. 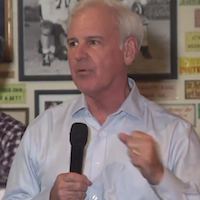 “When the people we charge with patrolling our Southern border, with protecting you and me, tell us we need to build some more border wall, we build a border wall,” Byrne said, to applause from his supporters.

Byrne also warned his supporters that “the people that presently hold this seat intend to keep it, and they will stop at nothing.”

Byrne, 64, from Baldwin County just across the bay from Mobile, was elected to Alabama’s 1st District U.S. House seat in a 2013 special election and has won re-election easily three times. He had previously served in the State Senate and as chancellor of the Alabama Community College System.

While Byrne offered full-throated support of Trump in his campaign kickoff, his previous comments about the president could come back to haunt him in a Republican primary in a state where the president remains popular.

During the 2016 campaign, after a video surfaced in which Trump was heard describing how he groped women’s genitals, Byrne withdrew his endorsement and called on Trump to exit the race, saying he could not defeat Hillary Clinton. However, he later made it clear that he did not support Clinton and would vote for the Republican ticket.

Byrne was joined by two of his House colleagues from Alabama, Martha Roby and Mo Brooks, in criticizing Trump during the campaign — and both of them discovered, as Byrne might, the political consequences of running afoul of the Trump faithful.

Brooks came in third place in the Republican primary in a 2017 special election to fill the Senate seat Jones now holds against two candidates who criticized him for his comments about Trump. Roby was forced into a primary runoff in 2018 for the same reason, although she survived.

Jones, 64, won a special election to the Senate in 2017 after the Republican nominee, Roy Moore, was accused of pursuing sexual relationships with underage girls, allegations which Moore denied. Jones is considered among the most vulnerable Senate Democrats on the ballot in 2020, in a state Trump carried in 2016 by 28 points.

During his time in the Senate, Jones has not tried to tack to the right to appeal to Alabama’s conservative electorate. He has supported the Democratic leadership on key votes, which included voting against the Republican tax cut plan and the Kavanaugh nomination, and he also supports same-sex marriage and providing a pathway to citizenship for undocumented migrants.

Jones ended 2018 with $2.1 million in cash on hand for the 2020 race, according to reports filed with the Federal Election Commission.

Given Jones perceived vulnerability, the race is expected to draw an number of Republican challengers into the primary with Byrne. State Auditor Jim Zeigler has formed an exploratory committee, and others considering the race are U.S. Rep. Gary Palmer from Hoover and State Senate President Pro Tem Del Marsh from Anniston.

The Senate race in Alabama is one of 13 Southern Senate races in 2020. Only two of those seats are held by Democrats, Jones and Virginia’s Mark Warner.