Tuberville gives Trump a shout out in his announcement; Sean Spicer reportedly set to work in his campaign

BIRMINGHAM (CFP) — Former Auburn University football coach Tommy Tuberville has announced that he will seek the Republican nomination for a U.S. Senate seat in football-happy Alabama in 2020. 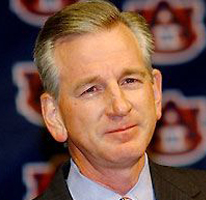 “After more than a year of listening to Alabama’s citizens, I have heard your concerns and hopes for a better tomorrow,” he said in a brief statement posted on a new campaign website and on Twitter. “I am humbled to announce the next step — I will be a Republican candidate for U.S. Senate.”

Tuberville, 64, coached Auburn for nine seasons from 1999 to 2008, ending with an 85-40 record. He won  an SEC championship in 2004, when his team went undefeated but wasn’t invited to play in the national championship game.

The man now sitting in the Senate seat, Democrat Doug Jones, is an Alabama graduate.

Tuberville will face U.S. Rep. Bradley Byrne, who went to law school at Alabama, in the Republican primary next year.

Jones won the Senate seat in a special election in 2017 after the campaign of Republican Roy Moore imploded amid allegations of sexual contact with underage girls.

Given Alabama’s strong Republican tilt, Jones is considered to be the most vulnerable Democratic senator facing re-election in 2020.