FANCY FARM, Kentucky (CFP) — In a sign that the derisive nickname recently attached to Senate Majority Leader Mitch McConnell may be taking hold in the political zeitgeist, a boisterous crowd of Democrats greeted him with chants of “Moscow Mitch” and waved Russian flags Saturday during his appearance at Kentucky’s famous Fancy Farm political picnic. 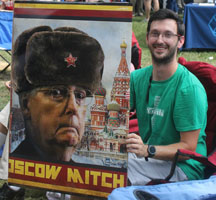 Kentucky Democrats, who have been raising money by selling Russian-themed merchandise targeting the Senate leader, kept up the pressure at Saturday’s picnic, attended by a who’s who of Bluegrass politics, with shirts and signs connecting McConnell to Russia in the wake of his decision to derail election security bills in the Senate.

A popular poster on the picnic grounds showed McConnell in a Russian military uniform, above the tagline “Spread the Red, Comrade.” One woman was even sporting a Russian fur hat in the 90-degree heat.

“That’s a rookie mistake from someone who’s not a rookie,” said Robert Kellems from Hancock County, who posed for photographs with a cartoon he was carrying showing McConnell as a turtle with an onion-dome shell. Kellems also noted the turnabout at play, pointing out that “the president seems to think name calling is OK.”

McConnell — who earlier in the week had pushed back against the “Moscow Mitch” gibe as “McCarthyism” — did not address the controversy in his remarks to the picnic, as the Democrats on hand booed and chanted throughout. He did gesture toward the protestors when he noted that “Washington liberals” angry with his role in pushing through Trump’s Supreme Court picks “responded by targeting me.”

Noting that he is the only top leader in Congress not from New York or California, McConnell told the crowd, “I’m the guy who sticks up for middle America and for Kentucky.”

“[Democrats] want to turn America into a socialist country. Donald Trump and Mitch McConnell are never going to let that happen,” he said. “That’s why I call myself the Grim Reaper — I’m killing their socialist agenda.”

McConnell also took a shot at his most high-profile Democratic opponent in his 2020 re-election race, referring to Amy McGrath as “Amy McGaffe” over her recent rocky campaign rollout in which she first said she would have voted to confirm Brett Kavanaugh to the U.S. Supreme Court and later reversed herself.

McConnell then joked that McGrath, who did not attend the picnic “sends her regrets. She’s still working up an answer on Brett Kavanaugh with her friends at MSNBC.”

McConnell supporters wearing “Team Mitch” shirts warmed up the crowd by parading through with giant cutouts of Kavanaugh and President Trump’s other Supreme Court pick, Neil Gorsuch, to be greeted with waves of the “Moscow Mitch” chant.

McGrath cited a previous commitment for not attending the Fancy Farm picnic. If she had, she would not have gotten the chance to address the crowd because under the rules for the event, only elected officials and candidates running for state offices in 2019 are invited to speak.

The picnic draws thousands of partisans from across Kentucky to Fancy Farm, a town of 500 on the far western side of the state that has hosted the event on the first Saturday in August every year since 1880.

The picnic is a fundraiser for St. Jerome Catholic Church in Fancy Farm, which was founded by Catholic settlers in the 1830s.