Wild card in Democratic primary remains Beto O’Rourke, although window to switch to Senate race may be running out

AUSTIN (CFP) — As he faces re-election in 2020, Republican U.S. Senator John Cornyn can boast of nearly two decades of experience; he has more than $9 million tucked away in his campaign coffers, with millions more on the way; and he represents a state that hasn’t elected a Democratic senator since the days of Ronald Reagan.

And yet, Democrats are falling all over themselves to get into what appears to be, at least on paper, an enterprise with dubious chance of success.

Nine Democrats are already running, with a little more than three months to go before the filing deadline. And the question mark hanging over their primary is whether former U.S. Rep. Beto O’Rourke will abandon his campaign for president and return to the Lone Star Star state to try once again for the job that eluded him in 2018.

Indeed, it was O’Rourke’s 2018 race that has inspired the Democratic energy now aimed at Cornyn. O’Rourke didn’t beat Republican U.S. Senator Ted Cruz, but he came closer than any Democrat since the late Lloyd Bentsen won in 1988. After getting kicked in the teeth in statewide races for 20 years, Democrats have seized on that result as a sign of happier days ahead. 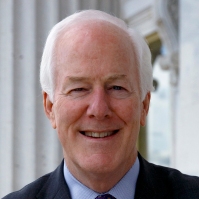 However, there are some shadows over such a sunny assessment. For one thing, Cornyn is much less polarizing than Cruz and has a higher net approval rating. The vaunted “blue wave” — which, in the end, was unable to carry O’Rourke to victory — is unlikely to be replicated in an election with Donald Trump at the top of the ticket, in a state where his approval ratings are better than they are nationally. And the Democrats will have to slog through a competitive primary, which was a hurdle O’Rourke didn’t face.

O’Rourke and his campaign team insist, with some vehemence, that he will stay in the presidential race and has no interest in switching to the Senate. And even if he were inclined to change his mind, his time may be running out.

Texas has an unusually early primary, in March 2020; the filing deadline is in December 2019, well before O’Rourke will know how he fares in Iowa or New Hampshire. Just six months remain to put together a credible campaign in the nation’s second-most populous state, and it is unlikely that the other Democrats in the race are going to abandon their campaigns to accommodate a failed presidential candidate settling for his second choice.

The candidate in the Democratic race who is perhaps the most O’Rourke-like is MJ Hegar, 43, a retired Air Force fighter pilot. Like O’Rourke, she excited the Democratic grassroots during 2018 with what was ultimately a losing campaign for a U.S. House seat in suburban Austin, and she got into the Senate race after O’Rourke decided to make a White House run instead of taking on Cornyn.

Hegar is the only Democrat who was in the race and raising money during the first half of 2019. According to Federal Elections Commission reports, she raised just over $1 million — about one-tenth of Cornyn’s haul over the same period.

The Democrat chasing Cornyn with the most robust political pedigree is State Senator Royce West, 66, who has represented a metro Dallas district for more than 25 years and is among the state’s most prominent African American leaders.

State senators in Texas actually represent more people that members of the U.S. House, giving him a strong geographical base, and the state now has the largest African-American population of any state, at more than 3.8 million.

The decision by West — a veteran lawmaker not given to tilting at political windmills — to challenge Cornyn was seen as an indication of Cornyn’s perceived vulnerability. However, West doesn’t have to give up his seat in Austin to run.

African Americans and Latinos together make up a majority of Texas Democratic voters, which is reflected in the Senate primary field, where seven of the nine candidates come from those two communities.

Rounding out the top tier of candidates is Chris Bell, a former congressman from Houston who was the Democratic nominee for governor in 2006.

Geography also plays a role in Texas politics. West has the Dallas lane mostly to himself; Bell and Edwards will compete in Houston, and Hegar and Tzintzún Ramirez are both based in Austin.

Fundraising totals for the third quarter, due in October, should provide more clarity about which of these candidates are actually going to be viable. But none of them are going to come anywhere close to the $80 million O’Rourke raised in 2018, for a race he didn’t win.

Cornyn has not drawn a primary opponent, which will allow him to aim all of his financial firepower at whomever survives on the Democratic side