Loeffler, appointed by Governor Brian Kemp, will have to defend her seat in November special election

Loeffler (pronouced LEFF-ler) took the oath of office from Vice President Mike Pence on January 6 to replace Johnny Isakson, a veteran GOP lawmaker who resigned his seat due to declining health.

She will seek the remaining two years of Isakson’s term in a special election in November. 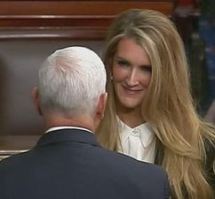 Loeffler, who has no previous elected political experience, was picked for the Senate seat by Republican Governor Brian Kemp in December after a public, two-month search in which he accepted applications from more than 500 would-be senators.

She joins the Senate just in time to participate in the impeachment trial of President Donald Trump.

Loeffler’s appointment had initially received a lukewarm reception from the White House and vocal opposition from some of Trump’s most fervent partisans, although that opposition has dissipated over the past month as Loeffler held a series of private meetings with conservative activists around the state.

Loeffler, 50, will become just the second woman to represent the Peach State in the Senate; the first, Rebecca Felton, was appointed to serve a single day back in 1922.

In addition to bringing gender diversity and an outsider persona to the GOP ticket, Loeffler will also be able to tap her personal fortune for the special election, in which candidates from all parties run against each other, with a runoff between the top two vote-getters if no one wins a majority.

Among the applicants passed over by Kemp was U.S. Rep. Doug Collins of Gainesville, one of Trump’s most vocal supporters in the House who has said he may challenge Loeffler in the special election. A Collins run could pit the president against Kemp, who won the governorship in 2018 after Trump backed him in the GOP primary.

So far, only one Democrat has entered the special election race — Matt Lieberman, the son of former U.S. Senator Joe Lieberman of Connecticut, the party’s vice presidential nominee in 2000.

Georgia’s other U.S. Senate seat will also be on the ballot in 2020, with Republican incumbent David Perdue trying to fend off a field of Democratic challengers.