CHARLESTON (CFP) — Democrats are going to the polls across South Carolina Saturday to pick their favorite for the party’s presidential nomination, which former Vice President Joe Biden hoping to revive his flagging fortunes heading into Super Tuesday and Vermont U.S. Senator Bernie Sanders hoping to add to his list of victories.

Not on the ballot in Saturday’s first-in-the-South primary is former New York City Mayor Mike Bloomberg, who has spent nearly $500 million of his own fortune on his campaign and will make his debut in contests on Tuesday in 14 states, including seven in the South.

Polls in the Palmetto State close at 7 p.m. ET. Only Democrats are voting; South Carolina Republicans opted to cancel their primary in support of President Donald Trump. 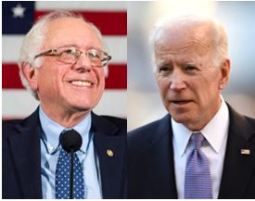 After finishing fourth in Iowa and New Hampshire and a distant second to Sanders in Iowa, Biden’s campaign hopes his strong support among African American voters — who will make up about 60 percent of the electorate in South Carolina — will propel him to his first victory of the presidential race.

Four years ago, Sanders was crushed nearly 3-to-1 in South Carolina by Hillary Clinton, who carried all 46 counties. But this time around, his chances will be helped by a more fractured field and a strong statewide organization built since his defeat last time around.

Most public polling in the last week of the race showed no statistically significant difference between Biden and Sanders, although some polls showed the former vice president had built a lead.

Polls show Steyer, who wasn’t a factor in the first three contests, in third place behind Biden and Sanders in South Carolina, with the rest of the candidates trailing.

A pot of 54 delegates are at stake Saturday, 12 allocated proportionally based on the statewide results and 35 allocated proportionally based on the results in the state’s seven congressional districts. However, only candidates who win at least 15 percent of the vote statewide or in a congressional district qualify for any delegates.

Pre-election polling indicates that Biden and Sanders could end up splitting all 54 delegates between them, although that will depend on district-level results, where public polling has not been done.

After Saturday, the presidential race in the South turns to seven Super Tuesday states where delegates will be selected — Virginia, North Carolina, Tennessee, Alabama, Arkansas, Texas and Oklahoma.