Biden won 81 percent of the vote; Sanders came in at just under 15 percent, below the threshold needed to win statewide delegates.

Biden’s 66-point margin was the biggest winning margin so far for Biden in any state, eclipsing his 47-point victory in neighboring Alabama.

The former vice president has now gone nine-for-nine in Southern primaries, with Florida and Georgia on tap next. 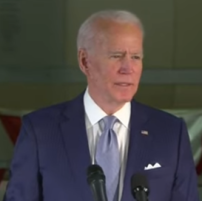 As in the rest of the South, Biden’s win was due to a strong performance among African American voters, who made up two-thirds of the Democratic electorate in Mississippi.

Exit polls showed that Biden was the choice of 87 percent of black voters, compared to 10 percent for Sanders.

Speaking to his campaign staff in Philadelphia after a public rally in Ohio was canceled over concerns about coronavirus, Biden called the success of his campaign “a comeback for the soul of this nation.”

“Tonight, we are a step closer to restoring decency, dignity and honor to the White House,” Biden said.

He also praised Sanders and his supporters for bringing “energy” to the party and made a plea for unity.

“We share a common goal, and together, we’ll defeat Donald Trump,” Biden said.

Sanders’s defeat is the latest in a long string of Southern setbacks, stretching back to his 2016 run against Hillary Clinton. In 2016, he won in just two Southern states; this time around, he hasn’t won any.

Sanders did not make a public appearance after Tuesday’s results. His campaign also canceled a planned rally in Cleveland.

Florida, on tap next week, is the second biggest prize in the South after Texas, with 219 delegates up for grabs. Recent public polling shows Biden with a wide lead over Sanders in the Sunshine State, where his past comments about Israel and embrace of socialism have gone down less than well with Jewish and immigrant voters, both key voting blocks.