The night the GOP’s lights went out in Georgia: Democrats gain Senate control

In the last act of a long and contentious political season, Warnock — the senior pastor of Atlanta’s iconic Ebenezer Baptist Church who was making his political debut — defeated Republican U.S. Senator Kelly Loeffler, leading by about 564,000 votes, or margin of 50.3% to 49.3%. 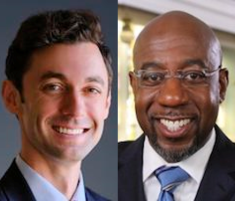 In a victory video posted on his campaign website, Warnock said “we were told that we couldn’t win this election, but tonight, we proved that with hope, hard work and the people by our side, anything is possible.”

“I am going to the Senate to work for all of the people of Georgia, no matter who you cast your vote for in this election.”

Warnock will make history as the first African American ever elected to the U.S. Senate from Georgia.

Loeffler, the multimillionaire Atlanta businesswoman appointed to the Senate last year by Republican Governor Brian Kemp, did not concede during brief remarks to her supporters, who gathered in person Tuesday night despite the COVID-19 pandemic: “We have a path to victory, and we’re staying on it.”

In a video post Wednesday morning, Ossoff, who narrowly lost a U.S. House race in 2017, thanked supporters and said he would focus on fighting the coronavirus pandemic once he gets to Washington.

“This campaign has been about health and jobs and justice for the people of this state,” said Ossoff, who, at 33, will become the youngest person to serve in the Senate in the last 40 years. “They will be my guiding principles as I serve this state in the U.S. Senate.”

Perdue’s campaign released a statement saying that “this exceptionally close election that will require time and transparency to be certain the results are fair and accurate.”

“We will mobilize every available resource and exhaust every legal recourse to ensure all legally cast ballots are counted,” the statement said. “We believe in the end, Senator Perdue will be victorious.”

However, Ossoff’s margin was more than twice as large as Biden’s win in November, which held up through two recounts.

Perdue, who was seeking a second term, had been in quarantine and off the campaign trail in the closing days of the race after a campaign staffer tested positive for COVID-19.

Tuesday’s results are yet another electoral rebuke to President Donald Trump, who lost Georgia in November and roiled the Senate runoffs with unsubstantiated claims of fraud and biting criticism of Kemp and Secretary of State Brad Raffensperger, who refused to validate Trump’s fraud allegations.

The Senate will be split 50-50 between Democrats and Republicans, with Vice President-elect Kamala Harris breaking the tie to give Democrats control.

Senate Majority Leader Mitch McConnell of Kentucky will lose his leadership perch, although he will remain as minority leader in a Senate divided 50-50.

With Senate control on the line, the four candidates and outside groups poured more than $882 million into the races — about $83 for every man, woman and child in the state.

The unprecedented spectacle of two Senate runoff elections on the same day in Georgia was the result of a Senate vacancy and an unusual feature of state law that requires candidates in general elections to secure an outright majority to win.

Loeffler was appointed to the Senate last year by Kemp to replace Johnny Isakson, who retired due to ill health. That triggered a special election to fill the two remaining years in Isakson’s turn, which featured an all-party contest in November in which the top two vote-getters — Warnock and Loeffler — won spots in a runoff.

With the Democratic victories in Georgia, the number of senators representing Southern states will rise from three to five, compared with 23 Republicans.