Sanders, 38, whose father Mike Huckabee, served as the Natural State’s chief executive from 1996 to 2007, announced her entry into the 2022 governor’s race in a video released Monday. 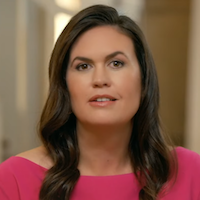 “Everything we love about America is at stake, and with the radical left now in control of Washington, your governor is your last line of defense,” Sanders said. “Our state needs a leader with the courage to do what’s right, not what’s politically correct.”

While Sanders will take the Trump brand with her into her run for governor, she faces what is shaping up to be a contentious Republican primary against two current statewide officeholders, Lieutenant Governor Tim Griffin and Attorney General Leslie Rutledge.

Sanders acknowledged the tough primary ahead, saying “my opponents will do everything in their power to destroy me, but I will not apologize for who I am or who I’m fighting for.”

Griffin, in a statement, welcomed Sanders to the race, saying he looked forward “to comparing our experience, track record and vision for the future of Arkansas.” He served as a federal prosecutor and two terms in Congress before being elected as lieutenant governor in 2014.

Rutledge, in a tweet, noted that she has been friends with the Huckabee family “for a long time, and will continue to be after this election.” But she added that the race is “about who has a proven record and not merely rhetoric.”

Rutledge is in her second term as attorney general and served as legal counsel to Mike Huckabee’s 2008 presidential campaign.

Republican incumbent Governor Asa Hutchinson is term-limited in 2022. No Democrats have yet announced for the post.

Sanders served two years as White House press secretary before stepping down to return to Arkansas in 2019. Her tenure was marked by frequent battles with reporters in the Washington press corps, who challenged her truthfulness — which she pointed to as a badge of honor in her announcement video.

“I look on the media, the radical left and their cancel culture, and I won,” Sanders said. “I’ve been tested under fire, successfully managing one crisis after another in one of the most difficult, high-pressure jobs in all of government.”

During the investigation into Russian attempts to meddle in the 2016 presidential election, Sanders admitted to investigators that she lied to reporters in the White House briefing room in 2017 by telling them that she had heard from “countless” members of the FBI who supported Trump’s decision to fire then-FBI Director James Comey. She later described the episode as a “slip of the tongue.”

If Sanders wins in 2022, she will return to the Governor’s Mansion in Little Rock where she spent her teenage years when her father was governor. She would also be the first woman to serve as Arkansas governor.

Sanders was national political director for Mike Huckabee’s unsuccessful presidential campaign in 2008. She joined Trump’s campaign in 2016 and was named as deputy press secretary, before ascending to the top spot in 2017 when Sean Spicer left after a stormy six months.