Big Risk: Ron DeSantis and Greg Abbott double down on mandates despite unpredictability of COVID crisis

Will short-term gain for leading charge against COVID-19 restrictions backfire if cases surge in schools?

(CFP) — A number of Southern Republican political leaders — most notably, Florida Governor Ron DeSantis and Texas Governor Greg Abbott — have decided to take a huge gamble; namely, to lead the charge against new COVID-19 restrictions, despite the Delta variant ripping across their states, filling up hospitals and stretching front-line workers to their breaking point.

It’s an experiment — literally — that is particularly risky given that one of the populations being experimented are hundreds of thousands of school children, whose parents cannot get them COVID-19 vaccinations even if they want to. 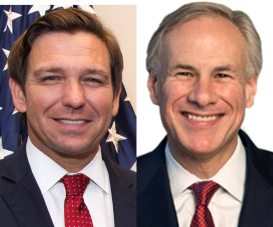 Governors Ron DeSantis of Florida and Greg Abbott of Texas

If DeSantis and Abbott are right — that all of the doomsaying and caterwauling by public health officials is an overblown overreaction — their gamble is likely to delight their base and pay dividends when they come up for re-election next year.

But if they are wrong — if busloads of children start getting sick or dying — these current prohibitive favorites could find themselves in electoral trouble. Which begs the question, is it worth the risk?

To see the possible pitfalls of this strategy, one need only look at the school district in Marion, Arkansas, where, after just the first week of classes in August, 900 students and staff were in quarantine.

To be clear, neither DeSantis and Abbott are anti-vaxxers. On the other hand, they are not merely taking a personal political stand against mask and vaccine mandates — they are aggressively pushing back against local officials and even private businesses who want to put these measures into place themselves.

Two hallmarks of traditional conservatism are giving power to local officials to make decisions they think best for their communities (particularly school boards) and giving businesses free hand to run their enterprises as they see fit. Both have gone out the window amid a conservative backlash to mask and vaccine mandates, a wave which DeSantis and Abbott seem eager to ride.

DeSantis has gone so far as to oppose hospitals requiring staff on the front lines of the pandemic to get vaccinations, and he has gone to court to block cruise lines from requiring vaccinations for passengers, which the cruise companies desperately want.

Given the devastating outbreaks of COVID-19 among cruise ship passengers during the early days of the pandemic, cruise companies want to err on the side of caution; DeSantis is coming down instead on the side of an expansive sense of personal liberty, even at the expense of public health.

Both Abbott and DeSantis are responding to a part of their base that is skeptical of vaccines and vehemently opposed to mask mandates and lockdowns. Some of these people even argue that masks are harmful for children, an assertion not supported by any reputable medical research.

The irony, of course, if that if these people had gotten vaccinated, the COVID-19 might now be mostly over, eliminating the possibility of mandates or lockdowns.

It makes sense, with perverted logic, for people who believe COVID is a hoax to support dispensing with restrictions even though most people are still unvaccinated. But if the last 18 months have taught Abbott and DeSantis anything, it is surely that COVID isn’t a hoax.

Abbott is facing primary challengers who already complain that he’s taken too many COVID precautions, perhaps explaining why he’s so resistant to more. DeSantis is not yet being primaried on this issue, so taking a hard line here is perhaps a way to stopping a challenge from getting off the ground — not to mention helping him with a possible 2024 presidential run.

Still, a recent Florida polled showed DeSantis’s job approval under water, in a state where the last three governor’s races were decided by 1 point or less. Texas is more Republican but not out of reach for Democrats if the public comes to believe people have died needlessly under Abbott’s stewardship.

Two other facts call into question the wisdom of DeSantis and Abbott’s big risk.

First, the fallout from the COVID pandemic likely cost Donald Trump re-election, something even the former president has been willing to concede. So, perhaps this is a lesson to which more attention needs to be paid.

And second, COVID has proven to not only be tremendously deadly but highly unpredictable. So, climbing out on a political limb and hoping that the worst public health crisis in a century will turn out all right in the end would seem a dubious long-term strategy, even if the base lustily cheers in the short term.

However, for better or worse, both DeSantis and Abbott have embraced this risk. So in that bed they will now have to lie.