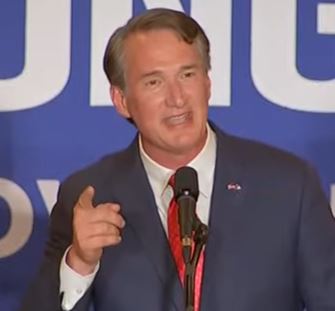 For the past two years, Democrats have controlled all of the levers of power in Richmond, ushering in a series of liberal polity initiatives that incensed conservatives; come January, Democrats will control only the State Senate, by just a single vote.

Youngkin, a wealthy private equity executive making his first run for political office, took 51% to 48% for McAuliffe, who was trying to return to the governor’s seat he held from 2014 to 2018.

Speaking to jubilant supporters, Youngkin called his victory “a defining moment that is now millions of Virginians walking together.”

“We are going to change the trajectory of this commonwealth,” he said. “It’s time for Virginia to be the place where everyone wants to live, not leave — where the relentless pursuit for a better life, for prosperity, is not burdened or blocked by self-interested politicians.”

In the lieutenant governor’s race, Republican Winsome Sears, a businesswoman and former state delegate, defeated Democratic State Delegate Hala Ayala by a margin of 51% to 49% percent. She will be the first woman and woman of color to hold the state’s second-highest office, which includes presiding over the closely divided State Senate, which was not up for election Tuesday.

In the attorney general’s race, Republican State Delegate Jason Miyares defeated Herring by a margin of 51% to 49% percent, giving Republicans a post from which to launch legal challenges against Biden administration policies.

All 100 seats in the House of Delegates were up on Tuesday, with Democrats holding a 55-to-45 majority. With 10 races still undecided, Republicans had won or were leading in races for 51 seats, with Democrats winning or leading in 49, which would give the GOP a one-seat majority.

Youngkin had been endorsed by Donald Trump, although he did not invite the former president to come to Virginia to campaign for him.

McAuliffe hung Trump’s endorsement around Youngkin’s neck, hoping antipathy to Trump in the Washington D.C. suburbs would sink his chances statewide. But Youngkin used cultural issues and parental anger over school policies to outperform Trump in suburban areas and also increased Republican margins in areas Trump won, which could be a GOP blueprint for 2022.

This year’s election was the first since Democrats took control of both houses of the legislature in 2019 and embarked on a series of policy changes that drastically altered the political complexion of the Old Dominion.

Legislators even reached back into the 1970s to dust off the Equal Rights Amendment and ratify it.

Republicans used the backlash to Democrats’ shift to the left in Richmond that allowed them to flip the House and win the commonwealth’s three statewide offices.

Once reliably Republican, Virginia has shifted toward the Democrats over the last decade. Both U.S. senators are Democrats, as are seven of its 11 members of Congress, and the last Republican presidential candidate to carry the commonwealth was George W. Bush in 2004.

Still, history was on Youngkin’s side: The Virginia governor’s race is held in the off-year after presidential elections, and since the days of Richard Nixon, the party that won the White House has lost the governorship every time — except in 2013, when McAuliffe won a year after Barack Obama did.

McAuliffe loss is likely to  reverberate in Washington, where Democrats have been struggling to pass President Joe Biden’s agenda. McAuliffe has conceded during the campaign that Biden’s popularity has waned in Virginia, although he still brought both Biden and Vice President Kamala Harris in to campaign with him.