ORLANDO (CFP) — To shouts of “Four More Years” and “Build The Wall” from an exuberant capacity crowd, President Donald Trump formally kicked off his 2020 re-election campaign Tuesday night with a stem-winding speech in the key swing state of Florida.

“We did it once, and we’re going to do it again,” Trump told the crowd at the Amway Center in Orlando, many of whom had waited hours in the summer sun and braved thunderstorms for the chance to get inside. “And this time, we’re going to finish the job.” 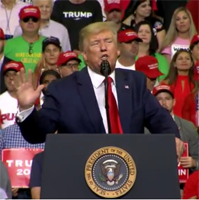 “I have news for Democrats who want to take us back to the bitter failure and betrayals of the past. We are not going back.”

During his hour-long speech, Trump touted the nation’s robust economy, lower unemployment, tax cuts and appointment of conservative judges as evidence of his administration’s accomplishments.

But he also spent the first part of his speech relitigating the Russia investigation, which he called a “great illegal witch hunt” designed to overturn the results of 2016 election.

“No president should ever have to go through this again. It’s so bad for our country,” he said. “No collusion, no obstruction. And they spent $40 million on this witch hunt.”

The president largely avoided mentioning his potential 2020 Democratic opponents by name in his speech, except for a single reference each to “Sleepy Joe” Biden and “Crazy Bernie” Sanders.

However, in a likely preview of next year”s campaign, he offered biting criticism of the Democratic Party, which he said had embraced socialism and was “more radical, more dangerous and more unhinged than at any point in the history of our country.”

“America will never be a socialist country. Ever,” he said. “Republicans don’t believe in socialism. We believe in freedom, and so do you.”

Trump also blamed Democrats for what he termed “illegal mass migration” and accused them of “moral cowardice” for being unwilling to fix an immigration system that he branded as a “disgrace.”

The president also leaned in on his hard-line trade policy that has drawn criticism even from some Republican members of Congress, insisting tariffs have revived the American steel industry and let China know that “the days of stealing American jobs … are over.”

Fans of the president began lining up outside the Amway Center, which seats 20,000 people, some 40 hours before the speech began.

Trump told the crowd that 120,000 people had requested tickets for the rally, which marked an unusually early campaign kickoff for an incumbent president.

The president carried Florida in 2016 on his way to winning the Electoral College, and the Sunshine State will again be a state he’ll need to secure a second term.

Orlando sits in the I-4 corridor, a swath of Central Florida that often plays decisive roles in statewide elections.

By shumater in Florida, White House 2020 on June 18, 2019.
← Insight: Are the politics of Obamacare changing in the South? GOP’s Alabama headache returns: Roy Moore running for U.S. Senate →